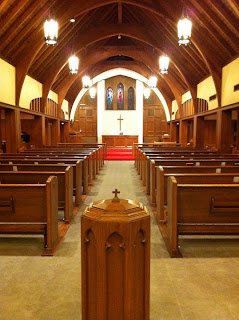 High Church...
...Low Attitude
Grace Lutheran Church is, first and foremost, a Lutheran Church. Visitors at Sunday morning's 10:30 communion service will recognize a service much like that held in Lutheran churches around the globe every Sunday (and very similar to other "high church" traditions like the Catholics, Episcopalians and Methodists).  What makes Grace different is that, while we love our traditions, we know that the true calling of a church is to feed the hungry, clothe the naked, help the poor, and be a vehicle for showing God's love to all the world.

We know that a lot of churches talk about accepting people as they are, and that's great, but we want to take it a step further, we want to embrace you just as you are.  That means that if you're a big church hat wearing person, then come in your big church hat, and if you're a cut-off jeans and grimy T-shirt kind of person then come in your cut-off jeans and grimy T-shirt.  It also means that we welcome people who find it difficult to be friendly sometimes and people who might occasionally pepper their speech with an inopportune words.

Grace has been a Reconciling in Christ Congregation since 1996.  That means we fully welcome and embrace the Lesbian, Gay Bisexual and Transgender community.  We believe that God has called us to love everyone, regardless of gender, race, disability, sexual orientation, or gender identity and expression.  We strive to joyfully follow God's call to love one another without judgment, without fear, and without discrimination.


Grace has a long history in the Montrose area. Following successful efforts begun in 1921 by field missionary Rev. John T. Gillison, a congregation was formally organized on April 16, 1922, as Grace Evangelical Lutheran Church of Houston. This was the first mission congregation in Houston of the United Lutheran Church in America, which body provided financial support until Grace became self-supporting. As a corporation, the congregation's life and activities have been overseen by elected members of the Church Council, with the Pastor ex-officio as president.

Members of Grace first worshipped in a one-room chapel at 2715 Waugh Dr. In 1921, the ULCA Board of Home Missions purchased the one-story, one-room Hyde Park Chapel from Second Presbyterian Church. When the present church site at Waugh Drive and Missouri was purchased in 1944, Waugh Drive was a major two-way thoroughfare, with a busy trolley stop at Westheimer and Waugh. Expansions; and additions in 1960, 1970 and 1985 resulted in the facility we know today. Enviably, the congregation is debt-free.

Although the majority of members in 1922 were of the church neighborhood, by 1930 numerous members resided well beyond Grace's community limits. That characteristic has held true ever since. A membership decline began in the 1970's. Children of the post-WWII period matured, married, and established homes far beyond the Grace area, and they usually joined suburban congregations. The Montrose community became commercialized and the Westheimer strip became identified by its "night spots." Grace families transferred out and the neighborhood became more transient. In his 1987 report, Pastor Akerman noted, "The figures indicate an ever-changing congregation." That characteristic, too, is still present.

For nearly two years in 1991-1993, Grace had the uncommon opportunity to share worship space and fellowship with the congregation of Augustana Lutheran Church while their sanctuary was razed and a new one built. Many new friendships were formed and greater understanding took hold as the two congregations merged their services, choirs, education, and social opportunities. It was with a mixture of sadness and joy that Grace members joined Augustana in dedicating their beautiful new building, marking the end of our time together.

Sundays
9am Holy Conversation Over Coffee

Grace is not your average Lutheran church. At Grace, we embrace everyone, regardless of gender, race, disability, sexual orientation, or gender identity. You see, we are a Reconciling in Christ Lutheran church, joyfully following God's call to love one another without judgment, without fear, and without discrimination.

Promote Your Page Too

Bread for the World